Welcome from our new Head Boy and Head Girl 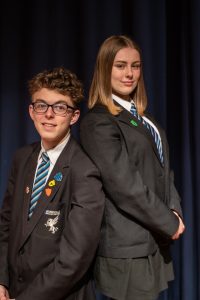 The Journey from ‘another boy’ to Head Boy

The first thing I did when I was given the role as the next Head Boy was to congratulate my opponent, who had now become a colleague. My anxiety had caused me to examine every speech I made for the best alternative I could think of. Competition, for me, is a strong motive and there was enough competition from opponents to stimulate and empower me.

However, let’s not start at the end. Instead, let’s think back to when I had the assembly about the option to join the prefect team. This had been in my mind for a while anyway, but as soon as I found out the deadlines, my mind was focused on writing the application letter. After talking to others from my year, I got a feeling of enjoyment, knowing that these people too could be spending their time as members of the prefect team: Even if I didn’t get in, I knew that team would be in good hands. Nonetheless, I sent my application three days after the assembly, a week before it was due in.

The next step to joining the prefect team was an interview, which consisted of roughly ten questions, such as ‘What do you do outside of school that would show your qualities as a Head Boy?’ My answer was prompt with ‘writing’. The questions had felt familiar to me, yet completely new, meaning I was thinking of my answers both through my heart instead of a plan. If you were to go for this role, I would suggest planning at least the main points about yourself, as it gives you a support to always return to if you ever feel lost.

The following Tuesday would be the day when we found out the results of the prefect shortlisting, and the top eight of those prefects (four girls, four boys) would work together on a situation, in order to show our leadership qualities. The top two candidates would be selected.

I felt lucky to become a prefect and was not certain of rising further. After all, I knew that other students applying contained the qualities to become Head Boy. However what surprised me was actually seeing myself in the same room as the top four.  I had indeed shown the qualities needed to get to the Head Boy role, or even the Deputy role. Only one challenge left: Speeches.

After the Easter holiday we had to rehearse, edit and prepare to campaign too. I used social media, creating ten videos with my friend and campaign manager. These videos finalised with the phrase, “Every thorn has its Rose”, a sentence that will stick in my mind as my personal motto throughout my time as Head Boy.

The second part of my campaign was an array of posters, making sure that no matter who you were, you would eventually come across my face.

Then, it was the deciding five speeches. Monday’s speech was the shakiest one. Tuesday saw attention perk up, every candidate speaking to year eight. Wednesday had speeches to years nine and ten, as well as to the staff. Although I somewhat regret not talking about my motivations more, I did, at least, show my personality.

At last Thursday came and the poll cards were all in and, with thanks to the admin team, the results were ready on the same day as the last speech. The results were given on the top tennis courts, overlooking the school that we would be heads and deputies of. We received congratulations for being able to get this far, either way, we knew we had persuaded a high majority of the school that we were worthy candidates then, finally, the results… 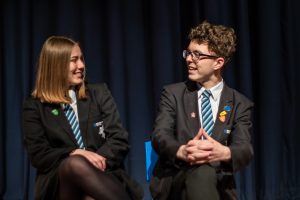 Entering into the competition I was extremely nervous, and I had very little confidence. However, I had a goal and that’s what kept me motivated. It took me a while to write the perfect letter to send in. A few days later I received an invitation to an interview. This experience was very new and yet not as scary as I had feared. I was very shocked when I found out that I had been chosen for the next stage which was a simulated scenario where we had to plan a year 7 disco with 4 boys and 4 girls. Mrs Cottle and Mrs Yarker were in the room evaluating what was being said and what was being written.

The next day we were told who would go on to deliver speeches in front of years 7, 8, 9 and 10 as well as in a teacher briefing. This public speaking was what we were all excited about. I was happy to have the opportunity, yet very scared as public speaking was something I had never done before, and I had no idea what to say or where to begin.

When the week of speeches arrived I had to go first every day. This took a little bit of pressure off which I was very happy about. Everyday was a little scarier especially as speaking in front of my own year came around. The thought of them judging me raced through my mind and the only thing that kept me going was the thought, “I can’t really go back now”.

On the last day we all waited for the results with anticipation and when I heard my name a wave of joy and relief went through me.

I am still so proud of myself for what I have achieved, considering all of it was new to me. As soon as I found out that I had been chosen, I turned to the other competitors and congratulated them. Not only did they do well but they had also helped me in advising me in how to present myself in the speeches.

In this role,  I hope to change the school for the better and give every student from year 7 to 11 a voice no matter who they are. I am honoured to have this position and I will ensure that I make the most of it, creating a firm foundation for others who follow after me. Jacob and I, with the support of the prefect team, will try to give every student an opportunity to develop themselves into brighter and more adventurous people.

Bournville School is a member of the Fairfax Multi Academy Trust, a successful network of schools who share the same values and aspirations.

Proud to be an FMAT Academy